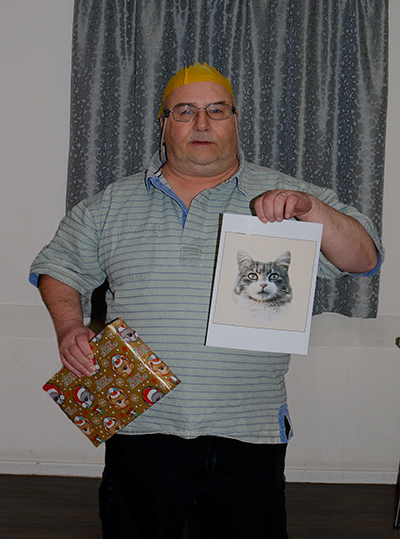 Kevin with his winning 'Print of the Year'

Fewer than normal members met on Monday 20th December for the Annual, Socially Distanced, Social evening and Quiz night. DJ Dave, as in previous years, had selected a play list of classic country and folk music to get the party going.
Members had provided an excellent Buffet, which we all enjoyed.
Following the Raffle, it was time for the popular twenty questions brain teasing Quiz. The results were very close this year with Nigel and Kevin's team beating Sue and Stuart's team by only one point. All the teams then had a dip into Santa's sack of goodies.
The annual Auction was postponed this year due to the current situation.
The final event was the judging of the 'Print of the Year' competition in which everybody had the opportunity to vote on their favourite print on display. The clear winner this year was Kevin Morgan with a cute image of 'Kitty'.
It had been another fun evening and in summing up, David thanked everybody for their generosity in providing the buffet and prizes. Wishing everyone a very merry Christmas, he said, it had been a fitting way to say goodbye to a very troubling year and hoped that 2022 would be better for us all.
.
Home
History
About Us
Venue
Programme
Club News
Galleries
Competitions
Events
Links
Contact us