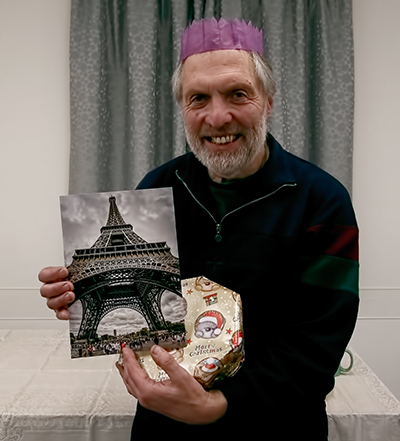 Stuart with his winning 'Print of the Year'

Monday 16th December was the night members came together for the Annual Xmas Party.DJ Dave had once again put together a play list of popular 60's music to get everyone into the party spirit.
A full programme of entertainment followed the excellent Buffet which the members had supplied and all enjoyed.
Members were divided into teams for the popular Twenty Questions brain teasing Quiz. The results were close but team 'A' made up of Stuart, Paula and Rick recorded the highest score and had first dip into Santa's sack of prizes.
This was followed by the 'Print of the Year Competition' in which everybody had the opportunity to vote on their favourite print on display. The clear winner this time was Stuart Warstat with his excellent image of Paris and the Eiffel Tower.
Following the Raffle, we came to the last event of the evening, the Auction, when the Chairman once again picked up his gavel and tried to sell off everything that had been donated, in aid of Club funds.
This is always a lot of fun and raised a healthy sum as well.
In summing up, David thanked everyone for their generosity in providing the buffet, prizes and items for the Auction. Wishing everyone present, a very merry Christmas, he said, it had been a fitting way to say goodbye to 2019. Everybody leaving in good spirits for the holidays.
Home
History
About Us
Venue
Programme
Club News
Galleries
Competitions
Events
Links
Contact us