South: In the footsteps of Shackleton 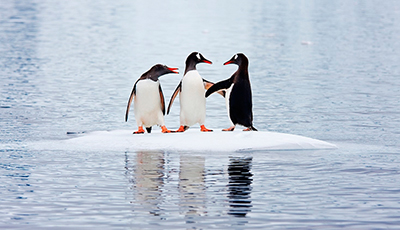 On Monday 18th November the club welcomed back two travel photographers, Duncan and Deborah Armour from Taunton Camera Club.
This time the subject of their talk was to be 'South: In the footsteps of Shackleton'.
Duncan started with the history of the great explorers such as Scott, Amundsen and Shackleton. With the aid of archival photographs he traced some of the epic journeys and the hardships endured by these early explorers, concentrating on the voyages of Ernest Shackleton in his ship Endurance.
Duncan and Deborah travelled to the region in the icebreaker Polar Star, visiting the Falklands, South Georgia and the Antarctic Peninsula.
When weather permitted, small groups of photographers were landed by Zodiacs onto the beaches to photograph the many species of birds and mammals nesting there. These include Oyster Catcher, Kelp Geese, Flightless Steamer Ducks, Skuas, Storm Petrels and the iconic Albatross. The Falklands has the largest colony of Black Browed Albatross and these magnificent birds live for over 40 years and mate for life.
Leopard Seals patrol the coastline on the lookout for unwary Weddell Seals. The huge Elephant Seals can be seen hauled out on the beaches. Many species of Penguins were also seen, Magellan, Rock Hopper, Chinstrap, Adelie and Gentoo.
On South Georgia, at Stromness Bay we saw the remains of the whaling industry, derelict buildings and piles of whale bones.
St Andrews Bay is home to a vast colony of King and Emperor penguins, they do not build nests but incubate their eggs on their feet, transferring it periodically to their partner, so enabling them to go out to sea for food.
Finally on South Georgia we visited the burial place of Shackleton who died in 1922.
As the ship turned for home we had some glimpses of Humpback whales and Orcas to round off the trip.
Everyone was captivated by the images from these talented photograpers, combined with Duncan's knowledge of the subject, made for another memorable evening at the Club.
Home
History
About Us
Venue
Programme
Club News
Galleries
Competitions
Events
Links
Contact us